Home / World / Asia
Bangladesh Laudato si’ drive: “One Catholic One Tree”
The Church in Bangladesh has launched a tree-planting drive as part of its bold response to Pope Francis’ Laudato si’ Encyclical. Cardinal Patrick D’Rozario explains that the initiative hopes to help the faithful strengthen their relationship between the creator, creation, and humankind. 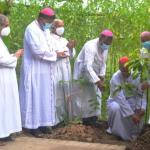 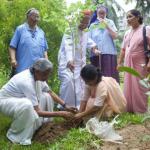 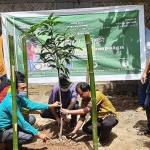 Trees represent many things. To some, they come with the promise of shade from the scorching sun on a hot day. For others, they are a source of sustenance or one of the many expressions of the beauty that we experience in nature.

In the beautiful South Asian country of Bangladesh, the Catholic Bishops have launched a campaign to plant 400,000 trees in an audacious initiative to celebrate the fifth anniversary of Pope Francis’ 2015 Encyclical Laudato si’ On the Care for our Common Home.

Kicking off the tree-planting drive at the Bishops’ Conference of Bangladesh Center in Dhaka in August this year, the Bishops, led by the Archbishop Emeritus of Dhaka, Cardinal D’Rozario, planted three trees symbolizing the clergy and the religious, the lay faithful and the Bishops themselves. The Bishops also encouraged everyone to do the same in each of the country’s eight dioceses.

Explaining the very specific number of 400,000 trees to be planted, Cardinal D’Rozario pointed out that the number is an approximate representation of the population of Catholics in the country based on a “one Catholic one tree” principle.

“Each Catholic will plant one tree in Bangladesh as a sign of their faithful citizenship to the world because we have to take good care of our common home and also the country,” he said.

Trees will be planted in the compounds and campuses of parishes, convents, religious institutions and Church-run schools. In rural areas where land is abundant, people are encouraged to plant trees in their gardens. In urban settings, Catholics are urged to take advantage of rooftop gardens to participate in the tree-planting drive. Urban dwellers who own land or homes in the countryside or in villages can ask their friends and neighbors to help them plant trees in their gardens.

Cardinal D’Rozario explained that each one of Bangladesh’s eight dioceses has been allotted a number of trees to plant according to its population. The tree-planting drive has also been taken up by organizations such as the Bangladesh Catholic Student Movement (BCSM), as well as the United Forum of Churches who, with its 200,000 Christians of other non-Catholic denominations, have accepted to join in the tree-planting initiative.

Christians are encouraged to plant various kinds of fruit trees “so that they may eat from their own gardens.”  One species the Bishops are encouraging the faithful to plant is teak – a durable wood – which can serve for construction and furniture making. Planting will have to take place in two monsoon seasons to ensure the survival of the trees: the first group will be planted this year, and the rest, in the 2021 monsoon season.

Of the many possible ways of responding to Pope Francis’ urgent and pertinent appeals in the Laudato si’ Encyclical, the Bishops of Bangladesh opted for a tree-planting drive because it is particularly suitable for the national context and because the idea was well received by the parishes and lay organizations across the dioceses.

Cardinal D’Rozario further explained that the Bishops of Bangladesh had formed a national committee to plan the celebration of the jubilee of the centenary of the birth of the Founding Father of the nation: Bangabandhu Sheik Mujibur Rahman. This jubilee is being celebrated throughout this year, and is followed by the nation’s golden jubilee for the independence of Bangladesh which will last throughout 2021.

These two jubilees, the Cardinal notes, coincide with the Laudato si’ 5th anniversary which, “could provide Christian and human perspectives to the other two jubilees."

Besides, Tree planting is also an ongoing movement in many regions in Bangladesh where trees have been destroyed due to erosion, cyclones and deforestation, and where, inspired by the Bishops’ initiative, a program is already being implemented and is aimed at planting one million trees.

Trees, Cardinal D’Rozario noted, serve many purposes. They bring “balance to the ecological imbalances” brought about by climate change, they protect people and their property from the devastation caused by the frequent cyclones in Bangladesh and help rainfall in the dry season.”

However, this tree planting campaign is not just another isolated agricultural program: it is aimed at highlighting the present ecological crisis brought to the fore in the Laudato si’ Encyclical letter. It simultaneously promotes ecological conversion by drawing attention to our irresponsibility and failures in environmental care and fosters a spirit of “rearing, caring and sharing.” Besides, it serves the pedagogical function of teaching us to develop “a relationship with creation, the creator and human beings – especially the poor among God’s creation”.

Laudato si’ year and beyond

Since the publication of the Laudato si’ Encyclical in May 2015, the Church in Bangladesh has taken many steps to promote respect for creation including organizing seminars, rallies and symposiums as well as issuing multiple publications to create awareness among the faithful and inspire holistic initiatives.

This year’s Season of Creation (1 September - 4 October 2020) themed “Jubilee for the Earth” was observed in Bangladesh with prayer days, homilies, seminars and educational programs. The Federation of Asian Bishops Conferences (FABC) also wrote a pastoral letter to the faithful, encouraging them to take measures that reduce wastage and pollution, as well as embrace measures that promote cleanliness in their surroundings. In a similar manner, individual Bishops wrote to the faithful in their particular dioceses suggesting other concrete actions to be taken by parish communities, pious societies and lay organizations.

Salt of the earth

Optimistic about the continuous success of the tree planting drive, Cardinal D’Rozario hopes that this initiative will increase awareness and motivate people to respond to the cry of the earth, helping the faithful grow in their spirituality by loving God, our neighbors and creation.

Though the Catholic Church makes up only 0.2 percent of the Bangladeshi population, the Cardinal affirms that the Church’s impact is keenly felt. He notes that the initiative contributes to the national tree planting program, giving it a theological, Christian and ecclesial perspective.

“The Church is like the salt of the earth,” said Cardinal D’Rozario. “You do not need a lot of salt for a plate of rice – you need only a few grains to make it tasty.”

Text of Pope Francis' message for the 2021 World Day of Migrants, Refugees
Asia

Pope’s May prayer intention: ‘For the world of finance’
Africa