Home / World / Africa
Cardinal Parolin brings Pope’s message of peace, faith to Cameroon
Cardinal Secretary of State Pietro Parolin expresses Pope Francis’ closeness and concern for Cameroon and the African continent, in his homily during the imposition of the pallium on Archbishop Andrew Nkea Fuanya of Bamenda. 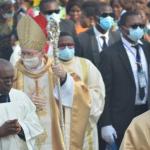 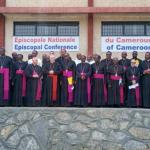 "The Pope is well aware of the difficulties that you have experienced in recent years and which you are still experiencing. He implores the Lord's consolation for you, especially for those who have been victims of violence or who, in this crisis, have lost friends and loved ones."

Those were the words delivered by Vatican Secretary of State, Cardinal Pietro Parolin, in his homily at Mass in Bamenda for the imposition of the pallium on Archbishop Andrew Nkea Fuanya.

He expressed Pope Francis' closeness to the people of Cameroon, as well as to the entire African continent.

The Pope, added the Cardinal, "joins in the desire for peace and reconciliation that rises from this beloved and wonderful land toward God."

“For this reason,” he added, “the Pope, on several occasions, has invited us to carry a small book of the Gospels with us. ‘The Gospel in your pocket’ is not a slogan but a spiritual program."

"Jesus desires good for humanity, and therefore frees us from Evil," said Cardinal Parolin. "Jesus is able to completely free us precisely through His simple and powerful Word: Come out of him! There are no magic formulas; not even strange gestures: it is His Word that is exceedingly effective."

The warm reception of Cardinal Secretary of State Pietro Parolin to the Cathedral of Bamenda in Cameroon shows that faith is bigger than politics and intimidation, according to Archbishop Andrew Nkea Fuanya.

In welcoming the visit of Cardinal Pietro Parolin, Secretary of State, “the first foreign authority to visit the people of the north-west and south-west regions of Cameroon since the beginning of the crisis in 2016”, Archbishop Andrew Nkea Fuanya of the Metropolitan Archdiocese of Bamenda voiced the sentiment of all those people who, despite widespread forms of intimidation, came to pray together for peace.

Various interpretations have been offered for the block imposed by the separatists. The delegation of the Holy See passed through a city where all activities were suspended and the streets were completely deserted - perhaps more in an attempt to show Cardinal Parolin the conditions in which people are forced to live, than to send a message of protest to the Church.

Archbishop Nkea thus paid tribute to the courage of the thousands of persons who showed up to take part in the solemn celebration of Sunday, 31 January.

It was enough to look into the eyes of the many young people who, on Saturday, 30 January, came from far and wide to welcome Cardinal Parolin to the precincts of the Cathedral of Saint Joseph in Mankon, to appreciate their heartfelt joy.

As Archbishop Nkea explained, “We are delighted because in this time of crisis we see you as a messenger of peace and an ambassador of reconciliation; we see you as a promoter of justice; we see in you the presence of our Holy Father Pope Francis in our midst. Even when the Holy Father speaks no words, his very presence is one of consolation, his blessings bring peace, and his words pour balm on wounds that are still fresh.  Here in your presence, I can say all the more forcefully: Now is the time for peace!”

Cardinal Parolin’s visit, organized down to the last detail by the Apostolic Nuncio, Archbishop Giulio Murat, and his assistant, Father Mario Biffi, takes place at a time when the populations of the regions of north-west and south-west Cameroon are suffering greatly for a situation they did not create: many are internally displaced or have fled as refugees.

On numerous occasions, businesses have closed, and for about four years now, children and young people have been unable to go to school.

As Archbishop Nkea noted, “Children have been used as bait for political reasons and for fighting. Many priests, religious, bishops and lay people of this province have been beaten, harassed or even killed in the conflict.

And yet the Church continues to bring the message of the Gospel as a beacon of hope to a traumatized people.”

For the city of Bamenda, the presence of Pope Francis’s Secretary of State is an invitation to contribute to working for peace, justice and reconciliation. As Archbishop Nkea put it, “We are certain that your arrival in Bamenda will be like the rain, which never falls without drenching the soil. So too, you will not leave us so that we can go back to fighting; you will leave us as people who will begin to love one another.”

At the conclusion of his greeting to Cardinal Parolin, Archbishop Nkea stated: “We, the people of Bamenda, lack many things. Yet the one thing we do not lack is faith. The fact that the people of Bamenda are here in such great numbers is a sure sign that, for them, their faith is bigger than politics. The faith of the people of the Archdiocese of Bamenda is bigger than intimidation.  Their presence here is also proof that the devil is a liar.  With faith in God, and with profound gratitude for the person of Your Eminence, we can now join together in praying for peace and reconciliation.”

Hope in a future of rebirth and reconciliation was evident on the faces of many people, and the songs that accompanied, day and night, the whole time of Cardinal Parolin’s presence, represented a first seed planted for the growth of the tree of peace.

The Secretary of State looked into the eyes of a suffering people, he set foot on soil bathed in the blood of hatred, and he offered words of reconciliation and peace, inviting everyone, without exception, to put aside all that stands in the way of the process of dialogue.

Lent: A time for renewing faith, hope and love
Europe

Gallagher to UN: Inalienable human rights must be defended
America and Canada

Catholic leaders call on EU to speed up vaccine rollout