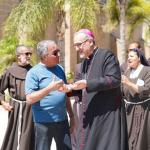 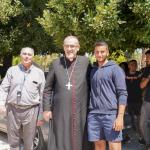 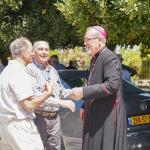 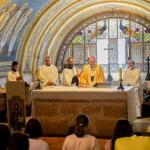 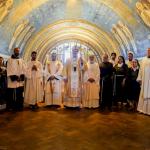 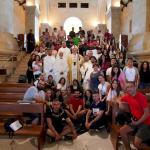 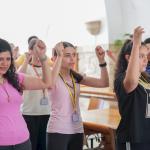 For the final day of the March of the Franciscans, which takes place every year during summer, Latin Patriarch of Jerusalem His Beatitude Pierbattista Pizzaballa  presided at a Mass on top of Mount Tabor and met with the youth who participated in the event.

Eight days. It’s how long the 31st march of the Franciscans lasted this year, from August 27th to August 3rd. Starting in Rameh, the participants walked from Eilaboun to Nazareth, to finally reach Mount Tabor on the eighth day.

“This idea of a march to walk, pray and spend time together first started in Italy,” explains Fr. Mario Hadchiti, OFM, one of the organizers. “Since then, there have been marches here in the Holy Land, but also in Jordan, Syria, Lebanon… It originated from St Francis of Assisi’s Festa del Perdono (Feast for the forgiveness of the sins).”

The Feast for the forgiveness of the sins, which takes place on August 2nd, commemorates St Francis’ wish for everyone who sincerely repented to be granted full pardon. For the saint, forgiveness and reconciliation were milestones of Christian values, which is why, in 1216, it is said that he asked Pope Honorius III the plenary indulgence for all those who visited the church of Porziuncola, which he had restored and where he had founded the Franciscan Order.

“Today, the aim of this march is not to encourage religious vocations, but to strengthen everyone’s own faith, no matter what form it takes – religious, consecrated, or lay,” says Fr. Mario. “There have been many young people who met thanks to this march and who became good friends, or even got married and founded families. We are walking together to build a relationship with ourselves, with each other and with God and His creation.”

When asked about what this march means to him, Fr. Mario Hadchiti’s first words are about the gifts he receives. “I do not participate because I bring the youth something, but because they bring something to me. And because I believe it to be a means to spread the word about the forgiveness of St Francis, and to support the local youth; to give them power, to encourage them to grow in faith here in the Holy Land.”

During the eight days of the march, which was organized by Fr. Raffaele Tayyem, OFM, the participants prayed, ate, walked and enjoyed activities together, such as painting, dancing, or handcrafting. “We are all from all over the Holy Land,” says George, a participant from Bethlehem. “Ramallah, Haifa, Rameh, Eilaboun… Myself, I’ve been doing this since 2010, and I’ve been a volunteer for it since 2013. Before I discovered this march, I did not go to church; it truly changed my life, completely and overly.”

For the last day, the participants were able to attend a Mass presided over by Patriarch Pizzaballa, inside the Church of the Transfiguration found atop of Mount Tabor, where it is believed that the transfiguration of Christ (Matthew 17:1–8, Mark 9:2–8, Luke 9:28–36) took place. After the celebration, the youth shared a time of exchange with the Patriarch, who spoke to them about the role the Church must allow them to take on, and who took the time to answer their questions.

“Everywhere – not just here – to be a Christian is not that simple,” he told them. “To talk about Jesus is not that easy. Because to say yes to Him means to say no to what is not Him. So we must ask ourselves, what does it mean today in the Holy Land to say yes to Jesus?” he added, encouraging the youth to play a role in the life of the Church of Jerusalem and to continue, through their actions and participations to events such as this march, to show their unity and their faith to the entire world.

Patriarch Sabbah: "The winner in wars is the one who earns peace, justice and humanity"
Palestine

Gaza: "Such incidents feed the desire to flee... especially among Christians.”
Palestine
Mount Tabor: "And he was transfigured in front of them”
Jordan

August 7, 2014... an indelible date in the modern history of Iraq
Jordan

Qaraqosh: Will the world listen to "the Voice of Peace"?