Home / Arab world / Iraq
Iraq: Over 120 children have their first communion in Qaraqosh
An additional 400 children will receive the sacrament in the coming weeks, said Fr. Attalla, a sign of a living community. Pope Francis’s visit is still in people’s eyes and heart. “Even today children sing what they sang for the pope and laugh.” 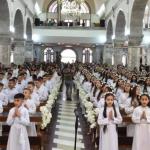 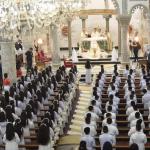 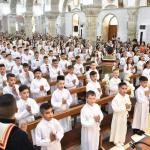 Christians in Qaraqosh who met with Pope Francis two months ago recently celebrated the first communion of 121 children at the city’s St John the Baptist Church.

For the residents of the most important town in the Nineveh Plain (northern Iraq), this event also marks a transition after the dark years of violence and terror under the Islamic State.

Speaking to AsiaNews, he described the atmosphere of celebration and sharing that characterised the event.

“The first communions involved the children of two churches, with seven more to go. This is the first stage, with 121 children, but another 400 are waiting,” he said.

“Thank God we have many children and this is a source of joy, because they give strength and hope to continue; they represent the future.”

The boys and girls of the first communion “put in a lot to prepare themselves. COVID-19 may have blocked the world, but thankfully it has not interrupted the life of the community.

“We are happy to see children full of joy, who still have in their eyes and hearts the visit of Pope Francis, a source of courage for all of us. Every now and then they sing what they sang for the Pope and laugh.”

The Islamic State militants destroyed the bell tower of St. John the Baptist Church, but the local community rebuilt it to show that their faith is stronger than death and destruction.

Qaraqosh is the most important Christian town in the Nineveh Plain; about 90 per cent of its 50,000 residents are Christian.

Under the Islamic State militants’rule between 2014 and 2016, the Syro-Catholic Cathedral of the Immaculate Conception was used for shooting practice, which left a sea of shell casings on the ground and bullet holes in the walls and columns.

During his visit, the His Holiness Pope Francis urged the community to rebuild because “Even amid the ravages of terrorism and war, we can see, with the eyes of faith, the triumph of life over death.”

For the pontiff, “Now is the time to rebuild and to start afresh, relying on the grace of God, who guides the destinies of all individuals and peoples. You are not alone! The entire Church is close to you, with prayers and concrete charity.”

To do so, “Forgiveness,” Francis said, “is a key word”, which “is necessary to remain in love, to remain Christian.”

Lebanon: Patriarchs, bishops discuss topics for the upcoming summit in the Vatican
Lebanon

Pope Francis’ commitment to a 'free and plural' Lebanon