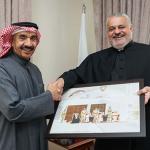 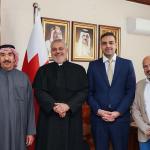 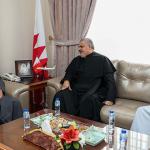 Director of the Catholic Center for Studies and Media (CCSM) in Jordan Fr. Dr. Rif'at Badr has paid tribute and expressed appreciation to the Kingdom of Bahrain's king, government, and people for the warm reception accorded to Pope Francis during his historic visit two weeks ago to Bahrain, as well as for the facilities provided to the CCSM delegation that participated in the  "Bahrain Forum for Dialogue: East and West for Human Coexistence" and  for covering the functionaries of the four-day papal visit.

This  was reported during the visit undertaken by CCSM Director Fr. Bader who led a CCSM delegation to the Embassy of Bahrain in Amman and meeting with Ambassador of Bahrain His Excellency Ahmed Yousef Al-Ruwaie in the presence of the Minister Plenipotentiary Hussein Al Mahmoud on Tuesday November 23. The CCSM delegation consisted of Bahaa Alamat, Soren Khodanian, and Osama Tobasi.

Bahrain's Ambassador His Excellency Ahmed Yousef Al-Ruwaie  highly valued the visit and said, " The Kingdom in Bahrain was  entirely like a beehive working day and night to ensure the success of this historic visit under the directives of His Majesty King Hamad Ibn Isa Ibn Salman Al Khalifa, as well as Crown Prince and Prime Minister His Highness Prince Salman Ibn Hamad Al Khalifa, and all the committees that worked with sincerity, diligence and perseverance."

He also thanked the CCSM for all the efforts exerted to ensure the success of the visit through writing articles, photos and television interviews that were admired by the Bahraini community.  During the visit, the CCSM delegation members  delivered a memorial photo taken by CCSM's photographers on the meeting between His Holiness the Pope with His Majesty King Hamad.