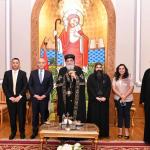 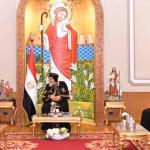 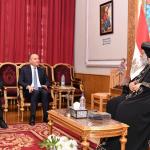 During their meeting, Adaileh affirmed Jordan’s message and the keenness of its Hashemite leadership to promote the values of love, brotherhood, peace and common living.

The Jordanian ambassador highlighted His Majesty King Abdullah’s continuous care and support for international initiatives that promote interfaith dialogue and consolidate values of harmony and rejection of extremism, including the Amman Message, the World Interfaith Harmony Week, and A Common Word launched by Jordan over the years.

Adaileh also conveyed the greetings of His Majesty King Abdullah to Pope Tawadros.

Pope Tawadros expressed the Coptic Church’s appreciation of the stances of His Majesty King Abdullah in supporting the Christian presence in the region, and the great role that His Majesty plays towards safeguarding Islamic and Christian holy sites in Jerusalem.

Pope Tawadros also expressed his gratitude to the King for his generosity in 2016 for allocating five dunums of land for the benefit of the Coptic Church at the Baptism Site to serve expansion purposes.

The meeting focused on cooperation between Jordan and Egypt in the field of religious tourism, as Pope Tawadros stressed the importance of Coptic Christians visiting the Baptism Site in Jordan as part of the Christian pilgrimage.

Lebanon: ‘The situation makes you want to cry, but we have hope’
Syria

How this predominantly Christian Syrian town went from 12,000 to 1,000
Iraq