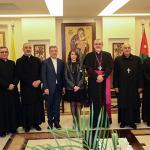 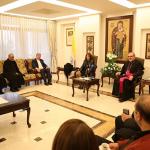 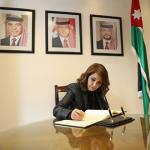 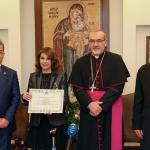 On Saturday, March 19, Latin Patriarch of Jerusalem His Beatitude Pierbattista Pizzaballa received at the Latin Vicariate in Amman Lebanese singer Mrs. Majida Al-Roumi, and bestowed on her the Latin Patriarchate Medal of the Golden Cross.

This honoring comes on the heels of the charity musical concert she held the day before at the Arena Theater, Amman University, which was organized by the Latin Patriarchate Schools in Jordan. Mrs. Al-Roumi thankfully offered the proceeds of this concert to needy students.

Mrs. Al-Roumi wrote on the visitors register book: "Thank you for your dear confidence in me. May the Lord preserve and protect you forever. Amen."