Home / Arab world / Bahrain
Pope sends a message to the King of Bahrain
Cardinal Luis Tagle, the Prefect of the Congregation for the Evangelization of Peoples has visited Bahrain for the consecration of the Cathedral of Our Lady of Arabia. The cardinal also presented the Bahraini King with a message from Pope Francis. 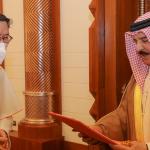 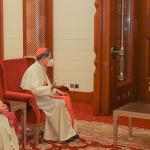 The newly-constructed Cathedral of “Our Lady of Arabia”, Awali, Bahrain, was inaugurated on 9 December by King Hamad bin Isa Al Khalifa of Bahrain.

Present at the occasion was Cardinal Luis Antonio Tagle, prefect of the Congregation for the Evangelization of Peoples who consecrated the Cathedral dedicated to Our Lady, on the next day in the presence of the Apostolic Nuncio to Bahrain, Kuwait and Qatar and Apostolic Delegate to Saudi Arabia, Archbishop Eugene Martin Nugent and the Apostolic Administrator of Northern Arabia, Bishop Paul Hinder.

During the homily at Mass, the Cardinal urged the faithful to be “living stones” that make the Church a home to the family of God. He also highlighted three ways through which Christians can remain living stones in Jesus, our cornerstone: listening to the Word of God, offering ourselves as spiritual sacrifices acceptable to God, and the service of charity.

Cardinal Tagle also presented a letter from Pope Francis to the Bahraini King, who, for his part, expressed his desire to receive the Pope in Bahrain one day . On 3 February 2020, Pope Francis had received the King in audience at the Vatican.

It was “a very cordial meeting,” said Bishop Hinder, describing the meeting which took place on 10 December between King Hamad Al Khalifa and Cardinal Tagle, accompanied by Archbishop Nugent. He added that the King also reiterated his desire to encourage an ever-greater opening of the country to people non-Muslim people.

Subsequently, Cardinal Tagle met with some members of the local Catholic community and highlighted their “unique experience of living the ecclesial communion within a community that has the characteristic of being multi-ethnic, multilingual and multi-ritual,” formed mostly by immigrants who came to Bahrain in search of work.

The tent-shaped Cathedral of Our Lady of Arabia has a seating capacity of 2300, and has its roof modeled in the shape of an octagonal dome. It is decorated with icons telling the story of key events in the history of Salvation.

The Cathedral also spots two chapels: a Blessed Sacrament chapel and another within which a life-sized statue of Our Lady of Arabia, the Patroness of the Vicariate, is enshrined.

The land for the Cathedral and Bishop’s house was donated by King Hamad bin Isa Al Khalifa in 2013 to late Bishop Camillo Ballin. On 19 May 2014, the King visited the Pope in the Vatican and presented him with a model of the Cathedral. The ground-breaking ceremony for the Cathedral was held on 10 June 2018.

Reflections on the Feast of the See of Antioch
Iraq

Aid to the Church in Need: Nearly $100,000 for distressed families in Lebanon