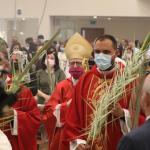 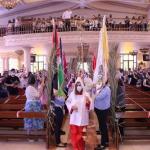 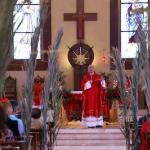 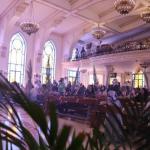 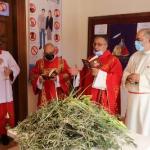 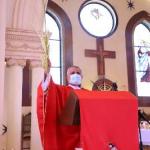 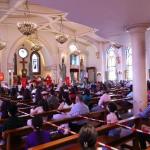 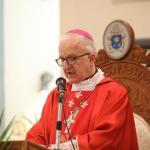 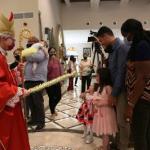 A week prior to Easter Sunday, Jordanian Christians celebrated Palm Sunday on April 25 after a hiatus of Sunday prayers that lasted for almost two months due to the emergence of Corona pandemic where, in an atmosphere of joy and jubilation, they held palm branches in memory of Lord Jesus' entry into Jerusalem.

In Jubaiha, Latin patriarchal Vicar for Jordan Bishop William Shomali celebrated a solemn Mass in the presence of a large number of people marking Palm Sunday for the first since the construction of the church last year.

In his homily, he highlighted the spiritual significance of Palm Sunday noting that the world needs goodness and solidarity in the midst of the pandemic which has turned life upside down. Referring to the sacrifices conducted by medical, security and educational teams, he said that "the recent amnesty issued by His Majesty King Abdullah II embodies a wonderful example of tolerance."

Director of the Catholic Center for Studies and Media in Jordan and Parish Priest of the Sacred Heart of Jesus Church in Tla' Al-'Ali, Amman,  Fr. Dr. Rif'at Bader celebrated Holy Mass. He stated that Palm Sunday celebrations is marked in a jubilant atmosphere as this feast could not be celebrated last year due to the long Corona-caused lockdown. He added, "We pray this morning for the beloved Jordan on its second centenary so that it would always remain a model in calling for peace and inter-religious dialogue, as well as in adhering to the "olive branch" approach, and in enhancing human dignity in which the motley of people with different religions who live in Jordan enjoy beautiful harmonious solidarity."

Palm Sunday prayers were held in various churches of the Kingdom with special dedication to those who passed away after being infected with Corona virus, and to the sick, hoping that the the extended human family would restore normal life. The faithful prayed for Jerusalem so that all basic rights of freedom, dignity would be preserved including free access to places of worship.

What is Palm Sunday?

Palm Sunday marks the first day of the Holy Week and the Sunday before Easter commemorating Lord Jesus Christ's triumphal entry into Jerusalem. It is associated with the blessing and procession of palms.

Lord Jesus traveled to Jerusalem knowing that this journey would end in His sacrificial death on the Cross for the sins of all mankind. Before He entered the city, He sent two disciples ahead to the village of Bethphage to look for an unbroken colt:

As He approached Bethphage and Bethany at the Mount of Olives, He sent two of his disciples, saying to them, "Go to the village ahead of you, and as you enter it, you will find a colt tied there, which no one has ever ridden. Untie it and bring it here. If anyone asks you, 'Why are you untying it?' say, 'The Lord needs it.'" (Luke 19:29-31)

The men brought the colt to Lord Jesus and placed their cloaks on its back. As Jesus sat on the young donkey he slowly made his humble entrance into Jerusalem.

The crowds that went ahead of Him and those that followed shouted, "Hosanna to the Son of David! Blessed is he who comes in the name of the Lord!  Hosanna in the highest heaven!" (Matthew 21:9)

The shouts of "Hosanna" meant "save now," and the palm branches symbolized goodness and victory. Interestingly, at the end of the Bible, people will wave palm branches once again to praise and honor Lord Jesus Christ:

After this I looked, and there before me was a great multitude that no one could count, from every nation, tribe, people and language, standing before the throne and before the Lamb. They were wearing white robes and were holding palm branches in their hands. (Revelation 7:9)

On this inaugural Palm Sunday, the celebration quickly spread throughout the whole city. People even threw down their cloaks on the path where Lord Jesus rode as an act of homage and submission.

The crowds praised Lord Jesus enthusiastically because they believed He would overthrow Rome. They recognized Him as the promised Messiah. (Zechariah 9:9)

"Rejoice greatly, Daughter Zion! Shout, Daughter Jerusalem! See, your king comes to you, righteous and victorious, lowly and riding on a donkey, on a colt, the foal of a donkey."

Although the people did not fully understand Jesus Christ's mission yet, their worship honored God:

"Do you hear what these children are saying?" they asked Him. "Yes," replied Jesus, "have you never read, "From the lips of children and infants you, Lord, have called forth your praise'?" (Matthew 21:16)

Immediately following this great time of celebration in the ministry of Jesus Christ, He began His journey to the Cross.